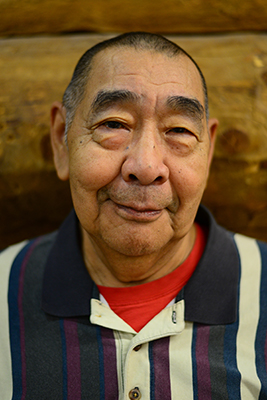 Shareholder Richard Atuk was one of BSNC’s first employees. Today, he is involved with Kingikmiut Singers and Dancers of Anchorage and Kissaq Kingikmiurguqtuat dialect language revitalization efforts.

When the Alaska Native Claims Settlement Act (ANCSA) formed Alaska Native Corporations, Atuk felt that its implementation was good for Our People, not simply for financial reasons, but for representation everywhere, including politically. He joined BSNC in 1972 and served as its vice president of lands until 1982. Atuk was instrumental in helping BSNC and many village corporations secure their land selections under tight deadlines. Atuk also served on the BSNC Board of Directors from 1978 to 1982.

In 1990, Atuk traveled with his cousin and aunt to Wales and worked with Elders to restart the dancing that had been suppressed for 50 years. The churches stopped the people of Wales from traditional dancing and singing starting between 1940-1944. He was inspired by Paul Tiulana of King Island.

“We found Elders in Anchorage, Nome and Wales to teach us. One teacher is Cecilia Amarok Smith. She remembered their dances and taught us what she knew. Her brother Romeo also shared their songs and dances with his grandchildren.”

Atuk and his wife visited Israel prior to the COVID-19 pandemic. “When Israel revived the Hebrew language, they started with nothing,” said Atuk. “Their language was minimized, and they made it their national language. It was a revelation to me that they started with no speakers and decided that everyone there is going to learn this language. It gives courage and evidence that we can do it too.”

Atuk is working on a Kingikmiut word book. “In that process, I learned that there is a lack of material that reflects our dialect,” said Atuk. “We need to get our own materials for our dialect.”

Atuk’s language and cultural revitalization efforts are motivated by reconnecting Our People with culture that has been taken away. “Our region has a high suicide rate and it’s a critical concern… We need to do something now,” said Atuk. “We need to pay teachers in villages to teach our languages. Nobody can afford to volunteer for the job of a language teacher. We need paid language teachers, and it will be worth it. The Western world, and its religions and economies, owes us.”

Atuk is the father of current BSNC Board Director Debbie Atuk.