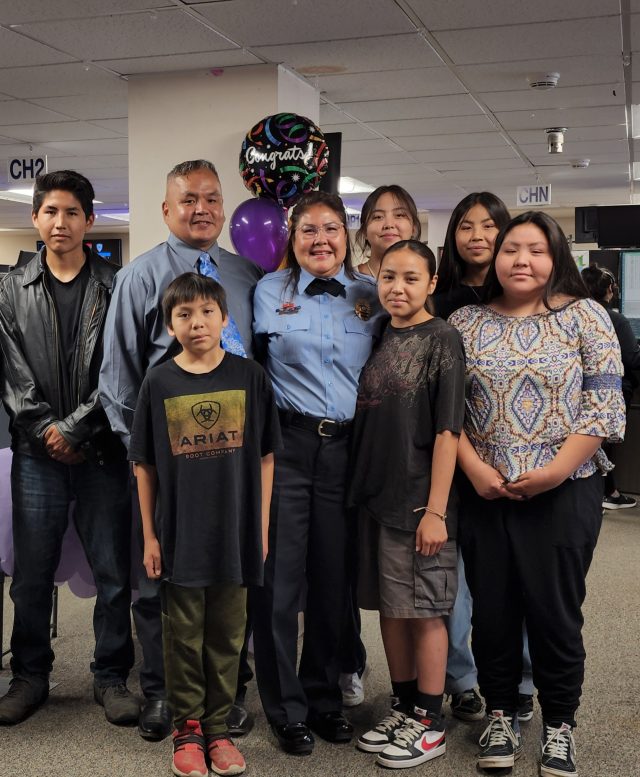 In 2001, BSNC shareholder Luanna Greybear saw that the Anchorage Police Department (APD) was hiring dispatchers on the evening news. A single mother of four young children, Luanna applied and passed every step required for the position.

In the beginning, it was difficult for her and her children with daycare and a changing schedule every 4-6 weeks. Fortunately, she found a daycare provider who accepted daycare assistance and was available for her rotating schedule. There were times she picked them up at 2 or 3 a.m.

The first time she sat in the dispatch room she loved it. Luanna answers business and 911 calls for part of the day and works the radio for the rest. She talks to people who may be having the worst day of their lives and strives to treat every caller with compassion and respect. Although it can be difficult work, Luanna treats each person like her family or an Elder.

This year, Luanna celebrated 21 years with APD. On July 4, 2022, Luanna was promoted to dispatch supervisor. As dispatch supervisor, Luanna supports her team and ensures that the dispatcher center runs smoothly. She is grateful and proud that she has the opportunity to serve her community and her work family. Luanna is also currently attending UAA part-time and pursuing a Bachelor of Business Administration degree in Economics.

Luanna was born and raised in Anchorage to Geneva Bright of Dillingham and John Penatac Sr. of King Island. Her maternal grandmother, the late Angeline Hodikoff Riley, was born and raised on Attu Island and was taken to Japan as a prisoner of war along with the entire village. Angeline’s father was the last Chief of Attu. He died as a prisoner of war in Japan along with many other villagers.

In 2003, Luanna married Abraham Greybear and together, they have six children. Today she is the proud mom of seven girls and three boys. Her daughter Victoria Marquez recently graduated from the University of Alaska Anchorage (UAA) nursing program. Her daughter Kathryn Treder plays national rugby for Team USA and her eldest daughter, Dajan Lefuel, is attending school in North Carolina to be a physician’s assistant. Dajan qualified to compete at the Olympic Team Trials in 2016 for wrestling. Luanna says her children are her inspiration.