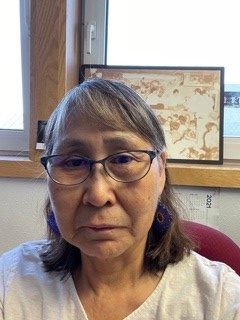 BSNC shareholder and Nome resident Bernadette “Yaayuk” Alvanna-Stimpfle was recently elected as Chair of the Alaska Native Language Preservation and Advisory Council. The council advises Alaska’s governor and legislature on programs, policies and advocates for the survival and revitalization of Alaska Native languages. She has been a member of the board since its inception in 2012.

Her family is originally from Ugiuvak (King Island), and Alvanna-Stimpfle only spoke Inupiaq until she entered kindergarten at age 5. She learned English at school and this bilingual and bicultural early upbringing gave Alvanna-Stimpfle the language skills and unique cultural perspective needed to pursue her passion of keeping Inupiaq alive.

Alvanna-Stimpfle started her education career as an Inupiaq bilingual/bicultural teacher. She has taught English as a second language to Vietnamese, Russian and South American students. She has taught in a regular classroom as well. She has worked as an Inupiaq Lead Teacher for the Alaska Rural System Initiative and as the Alaska Native Education Coordinator.  She has taught Inupiaq at the University of Alaska Northwest Campus and is currently working at Kawerak, Inc. as the Eskimo Heritage Program Director, which was created in 1981 to record and preserve the cultural history of the Bering Strait region.

Alvanna-Stimpfle earned a Bachelor of Arts degree in Inupiaq language and a Master of Education in Language and Literacy at the University of Alaska, Fairbanks. She is a Ph.D. Candidate at University of Hawaii, Hilo Campus with the Ph.D. program in Hawaiian and Indigenous Language and Culture Revitalization.