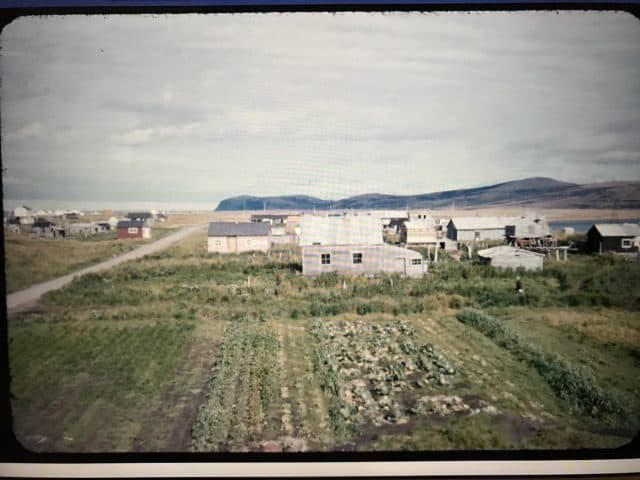 Unalakleet once proclaimed itself the garden capital of the state when gardens grown there in the 1920s and 1930s produced enough food to sell region-wide. Many credit Reverend Ernest B. (E.B.) Larsson who introduced many Unalakleet residents to agriculture in 1923.

This gardening tradition was practiced up until the 1970s when larger gardens were being replaced for housing and construction. The cultivation of vegetables also dwindled because many were abandoning the work of farming for high wages in defense construction at White Alice and the DEW Line station.

“Potatoes were the main crop then, but cabbage, cauliflower, rutabagas, turnips, carrots, beets, parsnips, lettuce, celery, onions, rhubarb, peas, radishes, Swiss chard and spinach were all grown successfully. Each year five or six thousand dollars’ worth of produce was grown, and most of it shipped to nearby Nome. The surplus was stored in local cellars, cooled by natural permafrost, and saved for winter use.” – Here is Alaska by Evelyn Steffansson

Another proponent for self-sufficient farming was Marvin “Muktuk” Marston. Marston’s food security concerns after the war inspired him to promote potato farming in Unalakleet where he resided. A large field was cleared near the North River bridge in Unalakleet by the Covenant High School where a large plot of potatoes and other vegetables were grown. This garden was resurrected this summer by a group of Unalakleet residents looking for a way to contribute to the community during the COVID-19 pandemic. Harvested vegetables were distributed to Elders, the Elder lunch program and other homes in need within Unalakleet. Many Unalakleet residents still cultivate gardens, including Unalakleet’s eldest female resident Elder Betty Anagick, age 93.