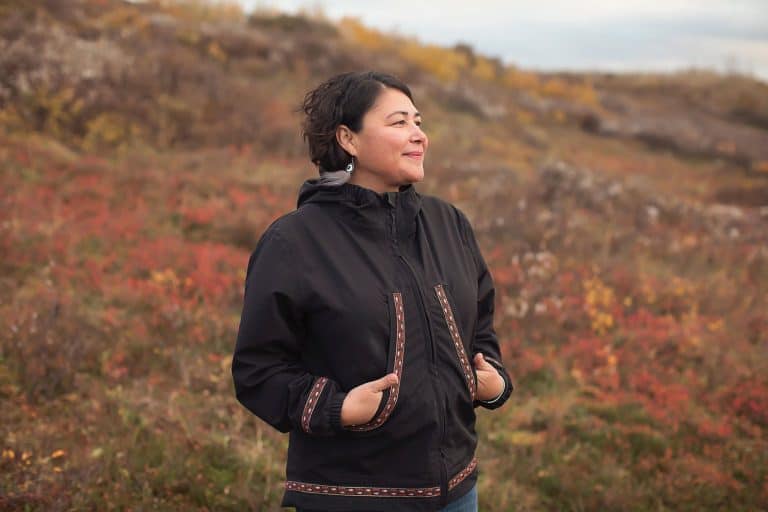 BSNC shareholder Alice Tununnanaq Bioff is the founder and owner of Naataq Gear: Arctic Wear, a company that draws from culture and tradition to craft contemporary, high-performance wear. The “Atmik” jacket is based off the traditional style of the qaspeq/atikluks with beautiful trim and is made with a hard shell/water resistant material. Bioff, who is originally from Koyuk, first had the idea to create the waterproof garment when a passenger aboard the Crystal Serenity cruise ship admired her kuspuk and asked if it was waterproof. With this idea and a sketch, Bioff entered the apparel industry and three years later, the Atmik jacket was finalized.

“Later as western culture made its way to Northwest Alaska and barges brought in supplies, women started utilizing the materials that were imported,” said Bioff on the Naataq Gear website. “I heard stories of women using the cloth flour sacks that came off the barges. They would take those sacks and make what we know today as qaspeq/atikluks. As time passed, depending on where you were located, the qaspeq/ atikluks were made so that you could identify where someone was from based on the style of qaspeq/atikluk or what gender they were from a distance. The qaspeq/atikluk has a rich history that continues today with new designs and materials used.”

Bioff’s parents are the late Harold Pilcher Sr. and Lily Mayland of Koyuk. To purchase the Atmik jacket or learn more about Naataq Gear, visit https://naataqgear.com/.